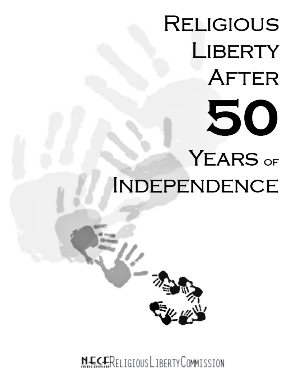 Religious Liberty After 50 Years of Independence

Fifty by any standard is a milestone. It is a figure that is marked by maturity, wisdom and benevolence. The 50th anniversary of Malaysia’s independence would have been anticipated in decades past to usher in a time of prosperity, liberality, political enlightenment and social harmony. Instead, it was marked by social and political unrest, deterioration rather than progress in the area of human rights and serious decline of public confidence in the institutions of government.

In the area of religious liberty, the past five years have seen more violations and incidents than the first 45 years of the nation’s existence. Critics have attributed these to the ineffectiveness and inconsistency of the present administration of Prime Minister Dato’ Seri Abdullah Badawi. While we do not believe it is his intention to oppress religious minorities, nevertheless his seeming inability to lead and control his administration and the Malaysian society appears to have provided an environment for extremist religious elements to proclaim and pursue their respective agendas. The 50th year had the highest incidence of religious liberty issues when names such as Lina Joy, Moorthy and Subashini became household terms. The coining of new words, such as body-snatching, demonstrated the existence of religious tensions simmering beneath the veneer of a civilised society.

It was in this context that the NECF Malaysia Religious Liberty Commission held a seminar on 11 August 2007. Topics addressed represented critical issues facing the minority religious communities. Paper presenters were drawn from the frontline of able and courageous advocates of religious freedom in the present struggle. The consensus of the papers published in this volume is clear: Malaysia is heading down a dangerous and slippery slope of extremism and intolerance. Serious initiatives are needed to arrest this trend in order to preserve a harmonious and peaceful plural society.

As a post-script, the results of the March 8 general elections surprised every level of the Malaysian society. Among the many interpretations of the election results is the possibility that Malaysia is entering the phase of a twoparty system. This may augur well for the nation. Among its positive benefits, a two-party system is more likely to ensure accountability and professionalism in politics and government. It may also provide a fertile ground for human rights to flourish. For the first time in Malaysia’s history, there is the exciting prospect that Malaysians have the destiny of the nation in their hands. What we become depends on us.

In the days of the patriarchs, God blessed Egypt through Joseph (Genesis 41: 54–57). Similarly, God will bless Malaysia through the Church so long as she continues to obey Him, committing herself to be the salt and light of all nations. The Church, as the agent of transformation, must be faithful in carrying out what she is called to do; even in times of chaos, she will not lose heart. What has happened and is happening are merely the birth pangs towards the evolvement of a transformed nation under God.

With this hope, the Religious Liberty Commission commends this volume to the Church of Jesus Christ in Malaysia.